The Yoga Spot is a tranquil yoga studio offering various classes and workshops in the heart of Aberdeen, Scotland.

The Yoga Spot was due to move to a new venue in August 2018, so it was the perfect time for them to update their logo, as well as redesign their website.

We worked closely with Michele Ross, the owner, in the initial stages of the Logo & Style Guide package, drawing on her personal sources of inspiration as a basis for designing the brand mark and developing the colour palette. We created a few different design concepts before settling on a mandala (a mystical symbol representing the universe) in the shape of a flower.

This first concept plays strongly on the word 'spot' in the name. It plays with the idea of a focal point of meditation and also resembles a stylised sun, taken from the ubiquitous "sun salutation" posture practised in many forms of yoga. The brand mark could also be interpreted as an eye symbolising vision or knowledge of the true self – a popular theme in the classic Indian yoga tradition. The brand name is in a bold slab serif font to give the logo a solid feel.

The second logo concept for The Yoga Spot uses the concept of the stylised flower or lotus, another popular motif used in the yoga world. The lotus represents purity, enlightenment and rebirth in many Eastern spiritual traditions. The lotus is contained by a circle in this design representing union taken from the translation of the word yoga "to yoke" or "bring together".  The centre of the lotus also creates a pleasing focal point or spot, a visual play on the name. The font used in this logo concept is sans-serif giving the logo a modern feel that is contrasted by the lotus brand mark.

This logo concept plays with the expression "X marks the spot" and the St Andrews Cross from the Scottish flag. The X intersects a circle or spot and is decorated with hearts and dots. The hearts symbolise Bhakti – devotion or love – which is regarded by many as the most powerful form of yoga. Without love, there can be no compassion. The font used in this concept is both bold and decorative to contrast with the delicate lines of the cross and other elements contained in the circle.

Michele chose the 2nd concept and we left aligned the text elements in relationship to the brand mark, making the logo tighter and more balanced. We also developed a vibrant colour palette seen in the style guide below. The logo strapline "Serene in Aberdeen" emerged as we worked on creating the one-liner for The Yoga Spot. Straplines don't usually rhyme, but we think this one works nicely.

At the same time, we helped Michele write a business one-liner to describe what The Yoga Spot offers. This was based on the kind of language that Michele uses to describe her yoga studio, and the strapline for her yoga business – Serene in Aberdeen – was inspired by the one-liner:

Looking for a tranquil yoga studio in Aberdeen?
Our friendly, experienced teachers will make you feel at home, so you feel completely supported, both in your yoga practice, and beyond.

Once we’d developed the colour palette and typography, we put this together with the finished logo to create a style guide for Michele’s business. This sets out how the logo, colours and typography should work together in different elements of a web page, e.g. headings, sub-headings, buttons, coloured panels, text over images, etc. 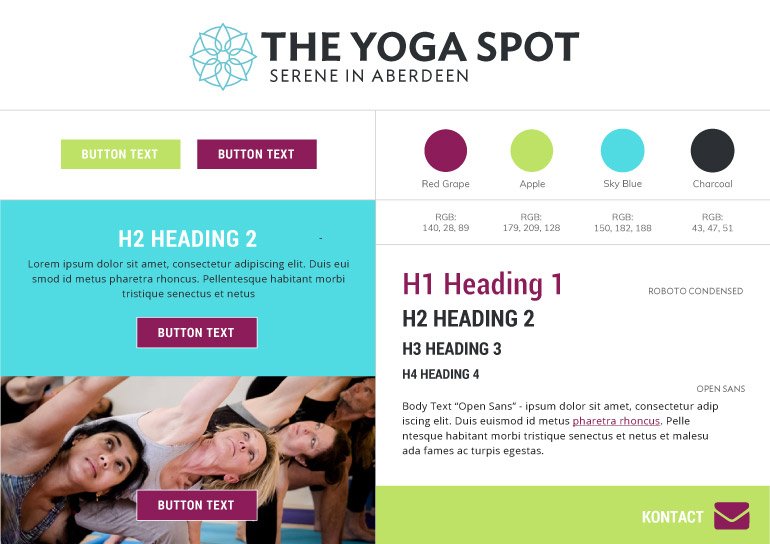 The final step in the process was to apply the completed logo and style guide to Michele’s brand new website, to give The Yoga Spot a fresh new look and a consistent, professional brand identity. 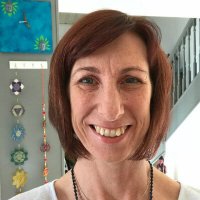 “Knowing that Hannah and Guy from Wildheart had worked with some colleagues on their websites and marketing, and liking the results, it was an obvious choice for me to work with them. Both being from a yoga background helped immensely in understanding exactly what was needed for the Yoga Spot going forward.

Dealing with Hannah and Guy has made, what could have been a challenging project, joyful, fun and inspiring.”

Read the other case studies for this client:

Read the details of what’s included in the: